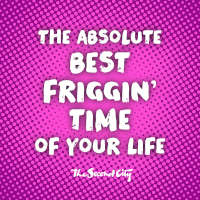 The Second City brings to DeKalb their newest show, “The Absolute Best Friggin’ Time of Your Life”.  The Second City opened its doors on a snowy Chicago night in December of 1959, and a comedy revolution began.  The small cabaret theater has grown to become the most influential and prolific comedy empire in the world, fostering generation after generation of superstars.  From Steve Carell to Keegan-Michael Key, Stephen Colbert to Tina Fey, Chris Farley to Mike Myers, Second City’s imprint is all over film, television, and beyond.
RESERVED TICKET PRICES
$27 / $37 / $47 / $57
$5 discount available for students and seniors 65+
Pricing based on how close to the stage you are (see seat map on next page)

COVID-19 Restrictions: Please check our website for the most up to date guidelines. If you have any questions or concerns please contact the Theatre.