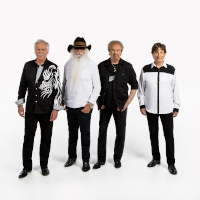 The Oak Ridge Boys are one of the most distinctive and recognizable sounds in the music industry. The four-part harmonies and upbeat songs of The Oak Ridge Boys have spawned dozens of Country hits and a Number One Pop smash, earned them Grammy, Dove, CMA, and ACM awards and garnered a host of other industry and fan accolades. Every time they step before an audience, the Oaks bring four decades of charted singles, and 50 years of tradition, to a stage show widely acknowledged as among the most exciting anywhere.  Their string of hits includes the Country-Pop chart-topper “Elvira”, as well as “Bobbie Sue”, “Dream On”, “Thank God For Kids”, “American Made”, “I Guess It Never Hurts To Hurt Sometimes”, “Fancy Free”, “Gonna Take A Lot Of River” and many others.  The group has scored 12 gold, three platinum, and one double platinum album—plus one double platinum single—and had more than a dozen national Number One singles and over 30 Top Ten hits.
Reserved Ticket Prices
$45 / $55 / $65 / $75
+ Add to Google Calendar