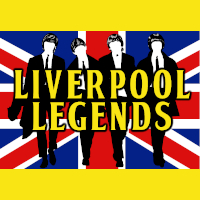 Liverpool Legends are four incredibly talented musicians and actors hand-picked by Louise Harrison- sister of the late George Harrison of The Beatles. Louise’s involvement in Liverpool Legends makes them the ONLY Beatles Tribute Band with a direct family link to the original Fab Four.

Liverpool Legends have headlined their own show in Branson Missouri since 2006. They have been awarded Best Band, Best Show, Best Tribute Show, and received the prestigious Visitors’ Choice Award for Entertainer of The Year.