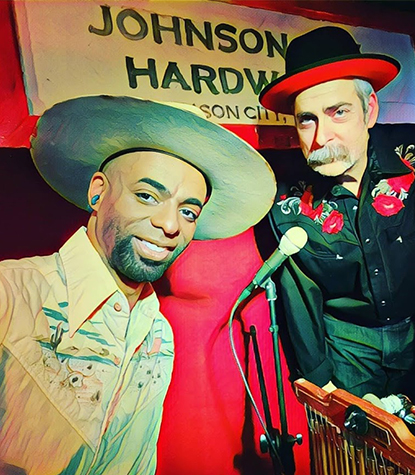 “There’s a certain excitement about early blues music, as if the composers just wanted to see what effect they could create with a sharped note here or a flat note there,” says musician Jerry Rabushka. Things we’re used to — the repetitive chords and the twelve-bar phrase — were new; so new that some publishers were resistant to put the blues on paper. They wanted sixteen bar verses. Where were the last four bars?

Writing it down wasn’t easy, and W.C. Handy, known as “father of the blues,” get the credit for taking these unusual melodies and fitting them into western notation. He didn’t invent the blues, but you could say he commercialized it. He figured out how best to notate it but also how to make the lyrics more accessible to a national audience. His first couple hits set the stage for what was to come, and thanks to him and other pioneers of the genre, a “golden age” of blues flourished in the 1920s.

St. Louis piano/percussion duo Cherry and Jerry will take the stage with stories behind some of the songs and composers that put blues on the map. They’ll perform landmark songs such as “St Louis Blues” and “Crazy Blues” and look at a few lesser-known tunes, from the ragtime influenced freewheeling songs of the 1910s to the later songs that looked forward to today’s music.

Pianist Jerry Rabushka performs the original sheet music, while Isaac Cherry, playing a setup of cajon, cymbal, and bell tree, adds a beat born of many different influences. Together they create a unique sound that makes this show a must-see!

This free event is open to all. No registration is required.