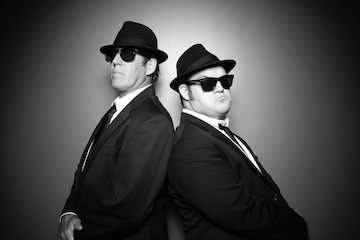 For three decades, the Blooze Brothers has been one of Chicagoland’s most in-demand show bands. We not only honor the music made by the original Blues Brothers in movies, TV, and recordings, but the spirit in which they played – from Dan Aykroyd’s love of traditional blues and soul to John Belushi’s love of classic rock. Like Aykroyd and Belushi, we fuse those great musical traditions into a stage show that energizes and delights hundreds of thousands of music fans across the greater Chicago area and beyond every year.
We’ve got gas in the Blooze Mobile, a briefcase full of rhythm and blues, and are headed toward the on ramp for the expressway to your heart.