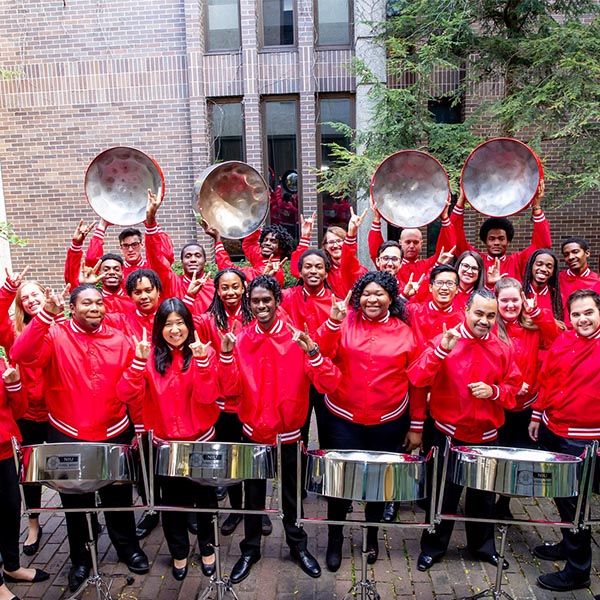 They’re back! Join DeKalb Public Library in the main lobby for an after-hours concert performed by the Northern Illinois University’s renowned Steelband. The concert will be an eclectic program of musical styles highlighting the versatility and profundity the steelpan.

The NIU Steelband is dedicated to demonstrating the versatility and profundity of the steelpan, the national instrument of Trinidad and Tobago.
Created in 1973 by G. Allan O’Connor, the NIU Steelband is the first active steelband formed at an American university. NIU is also one of the few institutions in the world at which students may pursue undergraduate and graduate music degrees with the steelpan as the major instrument of choice.

The ensemble has performed throughout the United States and across the globe. Some of the band’s most notable appearances include a performance for 18,000 soccer fans at Yankee Stadium, tours of Taiwan in 1992 and 1998, concerts with symphony orchestras (including the St. Louis Symphony and the Chicago Sinfonietta), and several performances at the Percussive Arts Society International Convention (PASIC). In 2000, the NIU Steelband had the distinction of placing 2nd at the World Steelband Festival in Trinidad, and represented the USA at the 2002 Seoul Drum Festival in South Korea.

The NIU Steelband regularly appears in concert at public schools, universities, conventions and arts series, and has many recordings to its credit, including Dangerous, which features an eclectic blend of musical styles.

After many years under the leadership of G. Allan O’Connor and steelband legend Clifford Alexis, the ensemble is now directed by Head of Steelpan Studies and Professor of Music, Liam Teague and Music Instrument Technician, Yuko Asada.

This concert is free and open to all. Doors will open at 6:00 and music will begin at 6:30 p.m. No registration is required. It is funded in part by the Mary E. Steven’s Concert and Lecture Grant.