A Brother’s Revival at the Egyptian Theatre 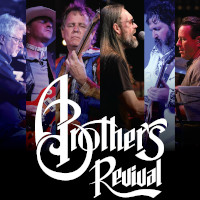 A Brother’s Revival – An Allman Brothers Band Tribute is coming to the Egyptian Theatre for a socially distanced, limited capacity show on Friday, June 25th at 8 PM.

A Brother’s Revival came together in 2019 as a celebration of the 50th Anniversary of The Allman Brothers Band. Former member, David Goldflies (78-82) and Mike Kach (singer/keyboard for Dickey Betts and Great Southern) joined forces to honor David’s former band. It is the most authentic Allman Brothers Band tribute that includes the fan’s favorite songs in their original format, just as they were performed when David toured with Greg, Dickey, Butch, and Jaimoe. Fan favorites include “Ramblin’ Man”, “Melissa”, “In Memory of Elizabeth Reed”, “Southbound”, “Whipping Post”, “Blue Sky”, “One Way Out”, “Soulshine”, “Revival” and so many others. The stage is set up just at The Allman Brothers Band set the stage during their most iconic years, including dual drum kits, timpani and a Hammond B-3 organ.

Tickets start at $25 and go on sale on Friday, April 9th at 10 AM. Space is limited, so do not hesitate to purchase your tickets. Tickets will be on sale at www.egyptiantheatre.org or at the box office by calling 815-758-1225.