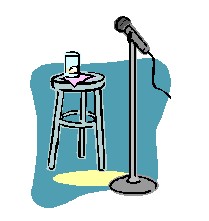 Annivar Salgado has entertained audience members throughout the Midwest, he was a semi finalist in the Doral Comedy Challenge and is a former producer at ABC TV.
Michelle Krajecki is one of Chicagoland’s top female comics she’s a member of the High Fiber Comedy Show and tours with a Vaudeville Review show known as Flashback Funny Forward.
Bob Jay is known as the Man of 999 voices. His show consists of Impressions of famous celebrities and Cartoon Characters, Sound Effects and Music. Bob was a top ten finalist in this year’s Daily Herald Chicago’s Got Talent
This is a must see show staring three of the most talented and funny people.