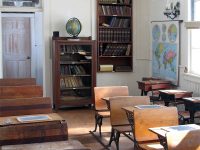 North Grove School, 3 miles northwest of Sycamore, was built in 1878 by the Swedish Evangelical Lutheran Church as a parochial and Sunday school.  Pupils of diverse ethnic backgrounds learned their lessons in Swedish, even several years after the DeKalb County public school system purchased the school in 1880.  The Sycamore unit district acquired the school in 1949, and it continued as a school until 1952, when it was closed.   The North Grove community continued to lovingly maintain the building and used it as a neighborhood social center for many years.

In 1970 North Grove School at 26745 Brickville Road (Map) was listed in the Illinois Directory of Historical Buildings. On May 24, 2012 the United States Department of the Interior placed the school and its outbuildings on the National Register of Historical Places. Today the school is still owned by the Sycamore School District but is leased to and lovingly cared for by the North Grove School Association, whose goal is to preserve this educational icon for future generations.