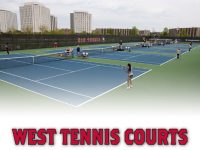 The Huskie Tennis Courts at Northern Illinois University sit in a prime location on campus. In the shadow of Huskie Stadium and Stevenson Towers, the six-court facility is the host site for Huskie men’s and women’s tennis matches. Bleachers near both court six and court one allow fans to take in all the action.