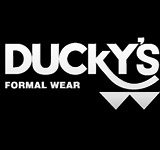 George “Ducky” Anthony opened his first store in Peoria, Illinois in 1946. When he started, Ducky’s was a place to buy custom tailored clothing and children’s shoes. However, George soon expanded into tuxedo rentals and the business exploded. His son and current owner, Steve Anthony, joined the company as a young child and took over ownership in 1972. Over the next few years, Ducky’s Formalwear would enter the Quad Cities, Galesburg, and DeKalb. The third generation of the Anthony family – Steve’s son and daughter, Alex and Stevie – are working to carry on the Ducky’s tradition for the next generation.