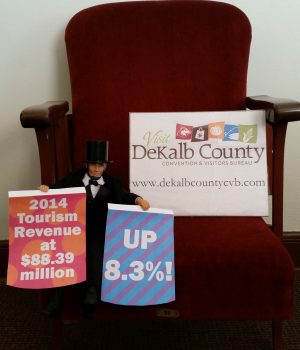 The Illinois Department of Commerce and Economic Opportunity, Office of Tourism released the 2014 Economic Impact of Domestic Travel on Illinois Counties report during its 12-stop tour around Illinois. The report showed the states record-breaking tourism industry numbers as well as the numbers for 102 counties around Illinois.

The DeKalb County Convention and Visitors Bureau is proud to share that DeKalb County is in the top 9 percent of counties that increased revenue from tourism spending. According to DeKalb County CVB Director Debbie Armstrong, “DeKalb County visitor spending increase is almost 3 percent over the state average of 5.4%. We had a bigger increase than 92 of the other 102 counties. We are in the top 9% for state and local tax revenue generated. Those are impressive numbers. We are proud of the part the DeKalb County CVB played in generating them to contribute to the economic vitality for our county businesses and residents.”