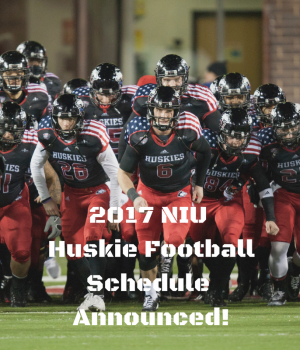 The NIU Huskies will play six home games this year at Huskie Stadium in DeKalb. The Huskies open the season at home on Friday, September 1st against a “Power 5” (previously BCS) conference team, Boston College. The Huskie’s welcomes Eastern Illinois on Saturday, September 9th to round out their back to back home games to start the season.

The Huskies will be back to DeKalb on Saturday, October 7th for the 111th annual Homecoming game against Kent State. This will also kick off their Mid-American Conference (MAC) slate.  They round out their home games for the season with three weeknight games against MAC opponents on Thursday, October 26th, Thursday, November 9th, and Wednesday, November 15th.

Season tickets for 2017 NIU home games are on sale now online at NIUHuskies.com or by calling 815-753-PACK (7225). Season tickets are an even greater value in 2017 with the addition of the new $199 Family Pack featuring four tickets in sections A or G and a new, lowered $60 price for season tickets on the East Side with general admission seating. Reserved seats in sections A, B, F and G are now just $115 for the season, a cost of less than $20 per game.

You can learn more about the Huskie’s Schedule in the NIU Athletics 2017 Schedule Announcement. We will have all the Huskie home games included on our calendar of events shortly.

We hope to see you all this fall at Huskie Stadium!