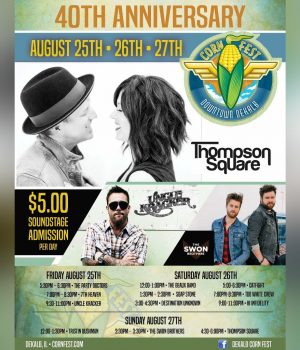 Uncle Kracker headlines the Friday line up. He vaulted to stardom as a charismatic presence and chief collaborator in Kid Rock’s Twisted Brown Trucker Band. The Michigan singer, songwriter, and performer, also known as Matthew Shafer, kicked off a stunning solo career of his own in 2000 with his major label debut, Double Wide, and the #1 smash “Follow Me.” He has since produced four other albums including his most recent release, 2012’s Midnight Special.

The Swon Brothers and Thompson Square close out the three-day festival starting Sunday afternoon. The Swon Brothers finished third on season 4 of NBC’s The Voice. They released their first single “Later On” in 2014 and in 2016 released their EP “Timeless.”  Thompson Square has topped the radio charts across the U.S., Canada and Australia with #1 hits “Are You Gonna Kiss Me or Not”, “If I Didn’t Have You” and “Everything I Shouldn’t Be Thinking About.”  They received the ACM and CMA “Vocal Duo of the Year” in 2012 and their third album hits shelves later this year.

Corn Fest has over 95 food and merchandise vendors, a crafter area, full carnival and sound stage. On Saturday, Aug. 26, is the free corn boil from 11-2 (while supplies list). The annual car show is also on Saturday from 8:30-3, as well as the bags tournament that starts at noon. Explore DeKalb with the free historical bus tours happening both Saturday and Sunday.

Corn Fest is held in Downtown DeKalb August 25-27. Learn more about all the activities at cornfest.com 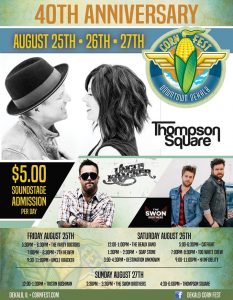