Revisionist Grazing at The Art Box

Revisionist Grazing at The Art Box 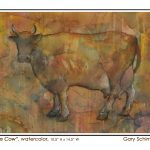 “Revisionist Grazing”, an exhibition of two-dimensional studio media by Gary Schirmer, will be on display at THE ART BOX, 308 East Lincoln Highway in downtown DeKalb, from November 24 – January 31, 2020.
“Bos domesticus”, Latin for domestic cow, was a theme that Gary Schirmer first explored in graduate school in 1989, predating the wildly popular “Cows on Parade” sculpture exhibition in downtown Chicago in 1999.  Schirmer used the theme as an inquiry into the nature of the bovine species, and its symbiotic relationship with the human species, that transpired by way of the simple desire to the subject as a life drawing substitute for the natural human figure.

“Revisionist Grazing” combines new work for a revival of the subject after 30 years of its conception, and old work that had been “put out to pasture” for some time.  This series of images straddles a line between whimsical fancy, an introspective rumination with regard to the nature of domestication, and the precarious places the animal occupies across planetary cultural boundaries.  Depiction of the bovine creature respectfully focuses on anatomy, personification, contextural juxtaposition, and formal artistic aspects with regard to medium manipulation on a variety of formats and grounds.

Schirmer is a working studio artist using two dimensional media for over forty years as a painter in oils, acrylics and watercolor; and produces finished drawings, fine art prints and photographs.  Medium manipulation and experimentation often become integral in his work, including using various means of photo image transfer into printmaking and mixed media work.  His subject matter is typically representational with narrative-based themes, often commenting on social and psychological perspectives relative to human relations, politics and the post-modern condition.

Outside of academia Schirmer works as a commercial artist and illustrator, portrait artist, scenic painter and prop designer/fabricator for the film and television production industries and for live theater productions.  He is experienced in museum exhibit design, production and artifact preparation, a freelance curator and judge for fine art venues and managed public spaces for art exhibitions.

A reception for the artist is scheduled for Sunday, November 24th from 2 – 4 pm at THE ART BOX, 308 East Lincoln Highway in downtown DeKalb.
A sneak preview to “Revisionist Grazing” is scheduled during the DeKalb Chamber “Taste of the Season in Downtown DeKalb” on Friday, November 22nd from 5 – 8 pm.  See dekalb.org for details.