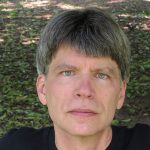 “Listen. There’s something you need to hear.” The DeKalb Public Library, in conjunction with Northern Illinois University, is pleased to welcome award-winning author, and DeKalb High School alum, Richard Powers, in an after-hours presentation and meet-and-greet open to the community.

Powers will read an excerpt from The Overstory (2018), a monumental novel about re-imagining our place in the living world. The Overstory is a New York Times Bestseller and is one of the Washington Post’s and Chicago Tribune’s 10 Best Books of 2018. Powers will also speak about his time in DeKalb and the library’s role in starting him off as a writer.

One of five children, Powers was born in Evanston, Illinois. His family later moved a few miles south to Lincolnwood. When Powers was 11 they moved to Bangkok, Thailand, where his father had accepted a position at International School Bangkok, which Powers attended through his freshman year, ending in 1972. During that time outside the U.S. he developed skill in vocal music and proficiency in cello, guitar, saxophone, and clarinet. He also became an avid reader, enjoying nonfiction, primarily, and classics such as the Iliad and the Odyssey.

The family returned to the U.S. when Powers was 16. Following graduation in 1975 from DeKalb High School in DeKalb, Illinois, he enrolled at the University of Illinois at Urbana-Champaign (UIUC) with a major in physics, which he switched to English literature during his first semester. There he completed his Master of Arts in late 1979. Powers completed his first novel, a two-year project, Three Farmers on Their Way to a Dance in 1985.

Powers was named a MacArthur Fellow in 1989 and received a Lannan Literary Award in 1999. In 2010 and 2013, Powers was a Stein Visiting Writer at Stanford University, during which time he partly assisted in the lab of biochemist Aaron Straight. His list of awards and recognitions is extensive and continues to grow.

After his presentation, the library will hold an informal meet-and-greet in which community members can interact with Powers. There will be light refreshments and appetizers.

This event is entirely free and open to all; no registration is required. It is funded in part by the Friends of the DeKalb Public Library. Please join us for this special occasion!

Promoting Your Non-Profit on a Limited Budget